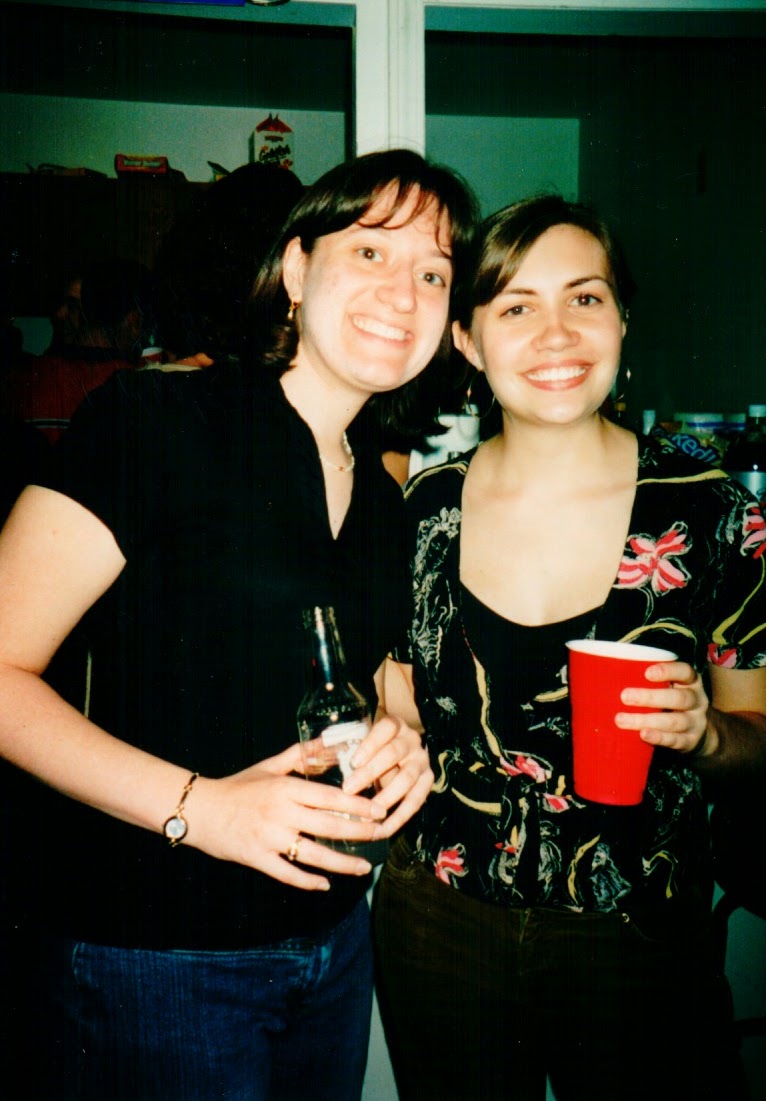 The Ithaca College Board of Student Publications has appointed junior Jack Curran as editor-in-chief of The Ithacan for 2014-15.
Curran, from Ballston Spa, N.Y., is currently the paper’s online news editor. He is a double major in journalism and economics.
In addition to his work as an editor and staff writer at The Ithacan, he has served as an editorial intern at the investigative news website “City Limits” in New York City and as an assistant producer at ICTV’s Newswatch 16.
His term as editor-in-chief will begin at the end of the current academic year in May.

Posted by Michael Serino at 8:17 AM No comments:

Graham Hebel Comes Back for a Visit

Former Ithacan photo editor Graham Hebel ’13 returned to campus for a visit this afternoon. It was his first look at the new Ithacan office, which he found quite impressive. Everybody loves those windows!
Graham is currently working as a desktop publishing assistant for Newman Architects in their New Haven, Conn., office, employing his wide range of photo and design skills in support of the firm's marketing initiatives.
He managed to catch up with former Ithacan colleagues Taylor Palmer and Durst Breneiser, who were in the office working on “Year in Review,”  and Editor-in-Chief Megan Devlin; he met several new editorial board members as well.
Posted by Michael Serino at 8:31 PM No comments:


#tbt Fifteen years ago (!) this April 7, the Ithaca College Board of Student Publications interviewed Rob Bluey ’01 for the position of editor-in-chief of The Ithacan. He got the job and went on to lead the paper to its first national title as Best Non-Daily College Newspaper from the Society of Professional Journalists. Rob is now director of digital media and editor in chief of The Foundry blog at the Heritage Foundation in Washington, D.C. He’s married to his Ithacan managing editor, Melissa Bloomrose Bluey ’00; they have two sons, Ben and Luke.
The board will be convening again next Tuesday to select a new EIC for 2014–15.
Posted by Michael Serino at 12:09 AM No comments:

The Heartland Brewery on W. 43rd St. in Manhattan was once again the venue for our annual dinner with New York City Ithacan alumni, held in conjunction with the spring National College Media Convention. There was great food and great service, as always.

It was great to see everyone again, as always, and for those of you who couldn’t make it, you were missed. But there’s always next year.
Posted by Michael Serino at 7:07 PM No comments:

The Ithacan wrapped up the spring National College Media Convention in New York today by topping off its Gold Crown Award with winning Second Place for Best Newspaper and Third Place for Best Facebook Page in the Apple Awards Best of Show Competition.
Posted by Michael Serino at 12:55 PM No comments:

The Ithacan has been a been presented with a Gold Crown award by the Columbia Scholastic Press Association at the spring National College Media Convention in New York City. The Gold Crown awards are the highest honors presented by CSPA.

The award recognizes overall excellence in publications that work “to combine their digital and print publications as one.” This award was for work produced during the 2012–13 academic year (Kelsey O’Connor, editor in chief). It was presented in a ceremony on March 14 at the Sheraton Times Square Hotel.

Posted by Michael Serino at 5:05 PM No comments:

Congratulations to former Ithacan sports editors Matt Kelly ’13 and Taylor Palmer ’14 for winning Best in Show in this year's Tompkins County PEGASYS Awards for their ICTV police comedy, “Loose Canons.”  The show follows the adventures of “two endearing, goofball cops” who “solve crimes nobody else can.”
The show will now be sent on by Time Warner to the Hometown Awards, a national competition for access programs held by the Alliance for Community Media.
Posted by Michael Serino at 8:21 PM No comments: 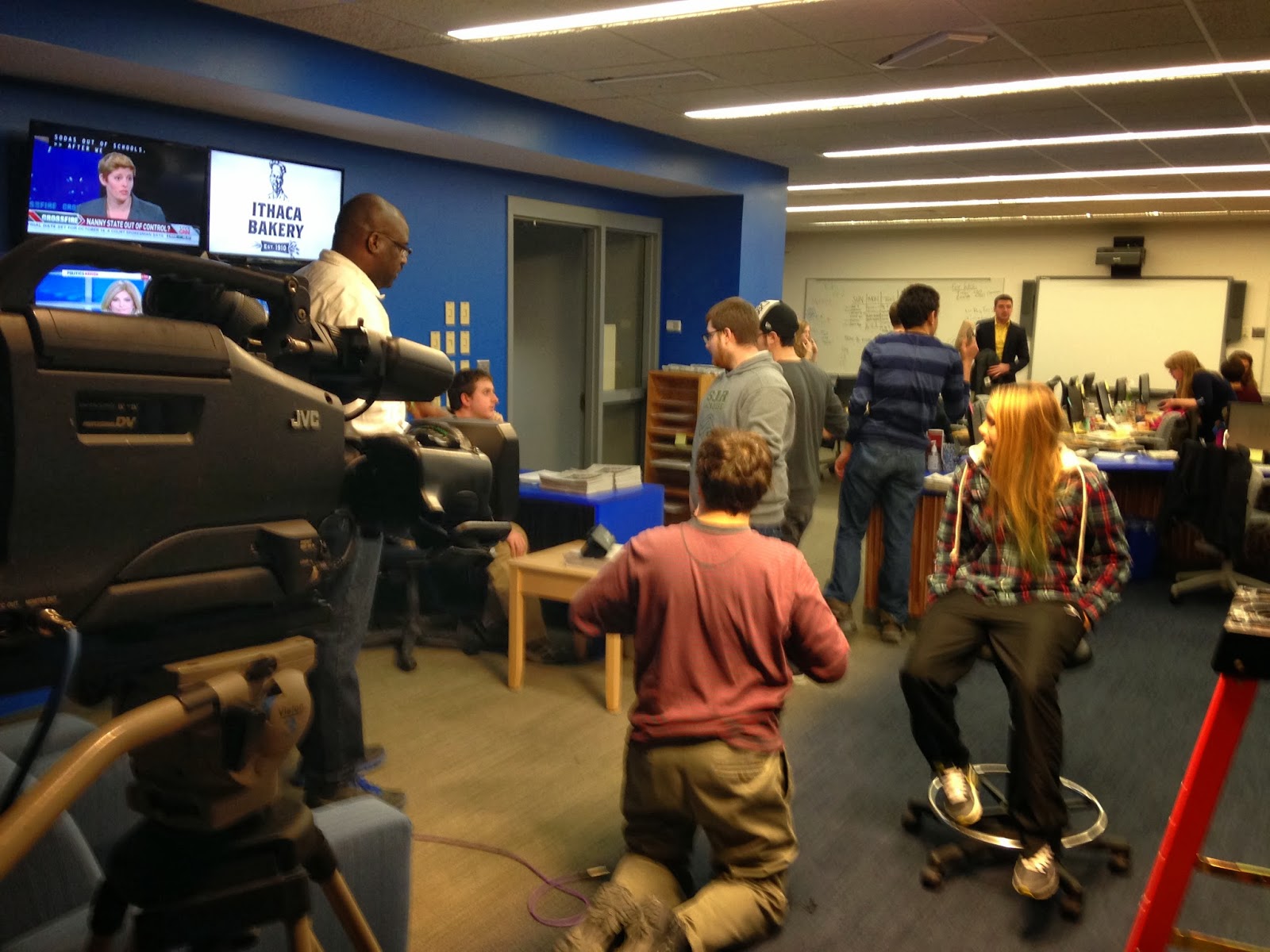 When we began planning the new Ithacan newsroom last spring, the idea was that it would not only serve as an ideal workspace for the Ithacan staff and provide a showcase for the paper’s daily print and multimedia operations, but that it would also serve as a converged workspace that would incorporate aspects of ICTV, the campus television station; and WICB, the radio station; as well.
That goal took a large step toward realization Thursday night when Newswatch broadcast it’s first brief segment from the newsroom. When we renovated the space, the west end of the room was fitted with appropriate lighting for a television shoot. Now we have a camera in place, as well as fixed communication between the newsroom and the studio. Additional broadcasts, content sharing between the student media and an aggregated website are among the projects in the works.
Dean Diane Gayeski set the whole thing in motion last year, and the hard work of the Park School's Technical Operations team helped make it a reality.
Here’s Newswatch’s Jesse Feldman ’15 from the newsroom:

And here's a piece our multimedia team put together to document the event.
Posted by Michael Serino at 10:32 PM No comments:

This year's Great Downtown Ithaca Chili Cook Off — better known as Chili Fest — brought crowds of people from near and far to The Commons, including Ithacan alumni. Erin Geismar ’09, Casey Musarra ’11 and Kaydi Poirier ’11 — “Team Newsday,” as we affectionately think of them, since all three of them are working there — made their annual pilgrimage on Feb. 15 to sample the city’s best chili. Former design editor Michelle Barrie ’10 came to town that night as well to join them for drinks and dinner.
The next day, Erin, Casey and Kaydi stopped by the Ithacan office to check out our new digs and say hello to current students. Erin even got to sit at the new editor-in-chief’s desk, a far cry from the desk crammed into the corner of the small office off 269 that she ran the paper from back in 2008–09.


Posted by Michael Serino at 2:28 PM No comments:

The Ithacan has been named one of 15 national finalists for the Columbia Scholastic Press Association’s 2014 Crown Award in the competition’s “hybrid” category. The hybrid category is defined as “print publications that provide live coverage via website between print editions.”

Founded in 1925, the CSPA is owned by Columbia University and operated as a program affiliated with its Graduate School of Journalism. The Crown Awards, first presented in 1982, are the organization’s highest recognition of overall excellence.
Posted by Michael Serino at 1:47 PM No comments:

The work of five staff members of The Ithacan has been honored with Gold Circle Awards by the Columbia Scholastic Press Association in its 30th annual Gold Circle competition. The awards are for work produced during the 2012–13 academic year.

Since 1984, the CSPA has recognized outstanding achievement in both verbal and visual categories for newspapers, magazine and yearbooks. Digital media categories were added in 2009. This year's competition attracted 12,847 entries produced by students at colleges, universities and secondary schools throughout the country. (Secondary schools are judged in a separate category from colleges and universities.)

Posted by Michael Serino at 1:42 PM No comments: 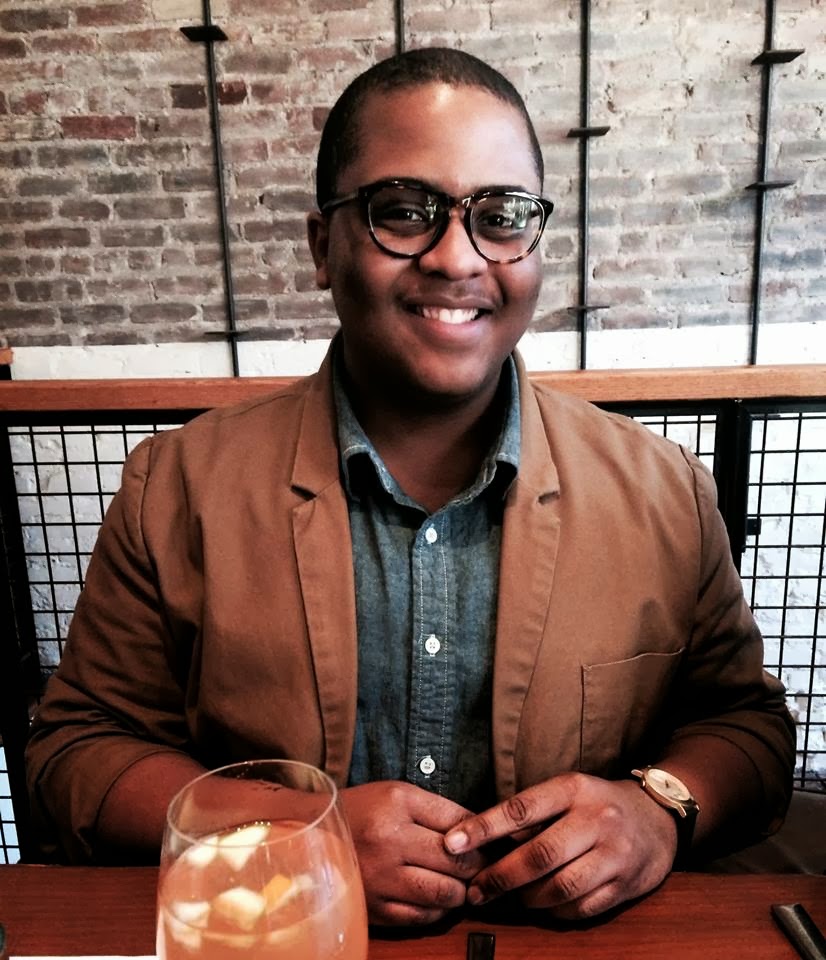 Although I didn't post anything about it at the time, I think there should be some record here of the hilarious version of Lorde's “Royals” that former EIC Aaron Edwards’12 recorded back in mid-November. The lyrics are by Washington-based journalist Adrienne LaFrance. It’s “Royals” for journalists, an entertaining take on breaking news in the digital age, and it got quite a bit of attention around the Web.
Aaron is currently associate editor at NBC News Digital’s Breaking News in New York.

Check out the recording, along with the full lyrics.
Posted by Michael Serino at 1:35 PM No comments: