Former Editor in Chief Vanessa Schneider ’07, now Geo Media Program Manager at Google, came to town for classmate and former Accent section colleague Liz Taddonio's wedding at the Farmers Market this weekend, and we got together for brunch with Kara Cusolito ’08 at the Carriage House Cafe in Collegetown. We talked about bringing Vanessa back in the fall to talk to our students about the work Google is doing with mapping and other tools useful for journalists.

Posted by Michael Serino at 2:42 PM No comments:

Can You Picture It Yet?

The latest photos of our newsroom-in-progress. 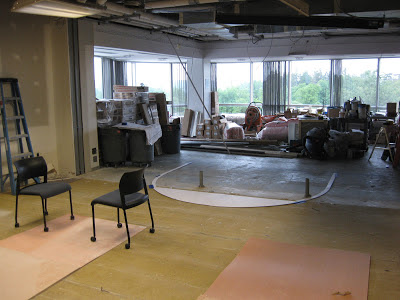 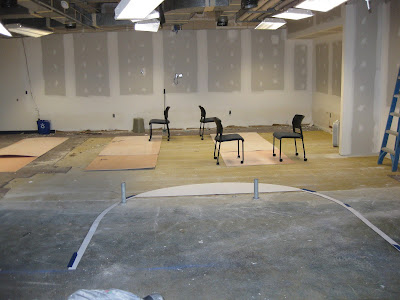 Posted by Michael Serino at 11:55 AM No comments:

Some Iconic Ithacan Memorabilia Found While Packing Up Park 269

And whatever happened to the Hello Kitty phone?
Posted by Michael Serino at 7:51 PM No comments:

The Ithacan Is Moving! 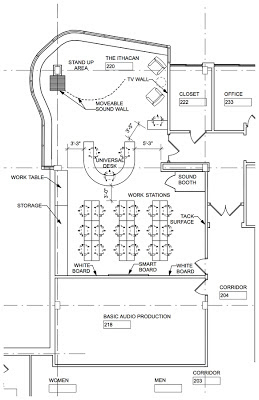 The Ithacan’s May 2 issue, the last of the Spring 2013 semester, was also the last one that will be produced in Park 269. It's the end of one era and the beginning of another as The Ithacan prepares to move from its long-established home to a new state-of-the-art newsroom space.

In recognition of the paper’s accomplishments and its overall role in journalism education in the Park School, Dean Diane Gayeski is moving The Ithacan to Park 220 (you know, the room with all those windows) and the room next door (219). We're tearing down the wall between them to create an open, digital-first environment.

And it’s going to be more than just The Ithacan office: Designed by Syracuse architects King and King, the new space will provide opportunities for converged media coverage with “Newswatch” and other Park student media. There will be a camera and space dedicated for TV stand-ups, a sound booth and other features designed to encourage collaboration between The Ithacan, ICTV and the two radio stations.

Alumni from more than two decades will never forget those long Wednesday nights in Park 269. Some will remember it for the excitement, the camaraderie, thrill of getting the paper done. Others will remember an airless, windowless room with florescent lights, oppressive heat and too many chairs. It was both, of course, and so much more. 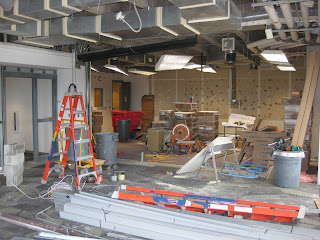 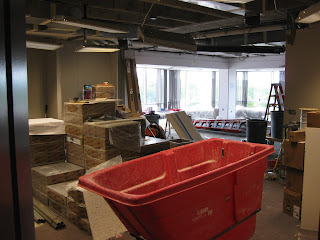 Posted by Michael Serino at 4:49 PM No comments:

On to the Next Phase

As another academic year ends, our new alumni are finding their way in the world.

Molly Apfelroth (Year in Review design editor, 2013) has accepted an internship at the Cohn and Wolfe Global Communications and Public Relations Agency in New York.

Kari Beal (Multimedia editor, Fall 2012) has been hired as an online and video associate producer at the Los Angeles Times.

Kacey Deamer (online news editor 2012–13) is entering the master’s program with a focus on climate change journalism at the University of Southern California, where she received an Annenberg Fellowship.


Shea O’Meara (Accent editor, 2011–12; Opinion editor 2012–13) has been accepted in the New York City Teaching Fellowship program and will be teaching in a New York City high school while pursuing a master's degree. She hopes to eventually earn a Ph.D. in peace and conflict resolution or public policy.

Posted by Michael Serino at 4:46 PM No comments:

Another Class Joins the Alumni Ranks

Commencement 2013 saw the members of the largest class in Ithaca College history take that first step from the world of education into the beginnings of their careers.
Commencement speaker David Boreanaz ’91 urged them to work hard in pursuit of their dreams.
“You have to earn it,” he said. “Earn it. No one is going to give you anything in this life. Earn it.”
Graduation is always a bittersweet moment for the students who have been deeply involved at The Ithacan. Eager as they are to move on to the next stage of their lives, working with each other week in and week out for four years, they form bonds not easily replaced. It’s no wonder so many of them maintain those connections throughout their lives.
One thing I tell each year’s incoming editorial board is how important it is to recognize and take advantage of the opportunity before them: It may be a very long time, if ever, before they will have so much control over a publication as important to its community as The Ithacan is to Ithaca College. There is no substitute for that kind of experience. Now the time has come to take the lessons they learned here and, quite literally, make the world a better place.

Posted by Michael Serino at 4:42 PM No comments: